“Media Representatives Migration Meeting” was held under the chairmanship of our Minister Süleyman SOYLU on Thursday 1 August 2019.

In his opening speech of the event, our Minister Süleyman SOYLU said, “Between 12-31 July 2019, 12.474 illegal migrants were arrested in Istanbul.”, about irregular migrant inspections in Istanbul, which has recently been on the agenda.

Emphasizing that they are faced with a downpour of migration, Mr. SOYLU stated that they are trying to inform the public and the press as accurately as possible in order to prevent abuse of this area.

Our Minister SOYLU also mentioned the common misconceptions about Syrians such as “Syrians received salaries from the state, they were given priority in hospitals, students were given a scholarship of 1200 TL from the state, they were accepted to universities without any exams, they were exempted from motor vehicle tax, they were assigned as government officers, they were becoming Turkish citizens randomly especially during the election period etc.”, and added that they faced many unsubstantiated claims and expressed once again that these claims do not reflect the truth.

After the presentation, questions from members of the press were answered. 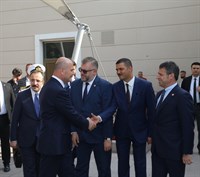 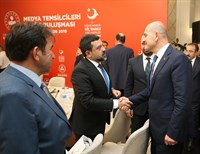